About the project Team Events Publications Join Us Funding Contact

Interested persons are invited to register via the online form. Although the seminar will be free of charge, advance registration is required. The number of participants is limited (50), and registrations will be handled on a first come, first served basis.

Read more about the speakers and their talks in the Speakers & Abstracts section.

The seminar will be recorded and the recording will be published on our YouTube channel as well as on this webpage.
Follow us also on Twitter and Facebook (@webimmunization) to learn about the latest news in the #Webimmunization research project. 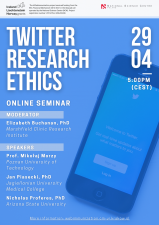 Researchers have blind spots, biases, and can be prone to wishful thinking. Therefore, equipped with good intentions, we would like to mitigate the moral risks associated with our research project. During the seminar, we are going to discuss the ethical challenges of the #webimmunization project with Internet research ethicists:  Elizabeth A. Buchanan, PhD and  Nicolas J. Proferes PhD. We are also open to contributions of other participants. Moreover, we hope that this seminar will contribute to general discussion regarding ethical challenges of Internet (Twitter) research.

In the #webimmunization project, we focus on psychological and social aspects of susceptibility to misinformation on social media. One of the key elements of our project is application of machine learning to scoring individual users and online communities on the webimmunization scale that we elaborated in laboratory settings.

Twitter, a microblogging platform, is one of the researchers’ favorite data source. The reason behind this is that the main idea of Twitter is to share one’s thoughts and impressions with the rest of the world, and Twitter as a company provides researchers with instruments allowing them to download and analyze huge amounts of data – through Twitter API and Twitter Firehose (Zimmer 2014). Moreover, Twitter is a place where misinformation is produced and spread. These two factors: Twitter openness and Twitter as a misinformation ecosystem make it a perfect match for our research project.

However, research using huge amounts of data from social media can be ethically controversial, despite the researchers’ good intentions. A few examples from the past can serve as a warning sign for us. Jason Kaufman, Nicholas Christakis, Andreas Wimmer, Kevin Lewis, and Marco Gonzalez – the researchers involved in the Taste, Ties, and Time study – followed their sponsor requirements and made their data open for other researchers. However, they were not aware that the data set was prone to quite easy re-identification and posed a risk to the individuals who had not given their informed consent for participation in the 3T study (Zimmer 2010). Similarly, when Kramer and his team published their study on emotional contagion on Facebook, they did not expect such fierce ethical controversies and criticism (Kramer 2014, Tufekci 2015).

About the project Team Events Publications Join Us Funding Contact